David Rowland, in his essay, “The Nocturne: Development of a New Style,” (The Cambridge Companion to Chopin, 1992) argues that Chopin took an established “nocturne style” and developed it in new ways. Much of Rowland’s essay focuses on establishing the particular nocturne style, developed by John Field and others, that Chopin inherited. This style was characterized by a relatively simple form (ABA or ABAB), with the left hand playing broken chords, and the right hand utilizing simple ornamentation. (Rowland, 43)

But Rowland, at the conclusion of his essay, also mentions some new developments that Chopin made to the genre. Rather than the typically straightforward ABA or ABAB forms of the earlier nocturnes, in the later ones “there is a sense of development, or progression through the work…. Op. 48 No. 1 is a good example. The return of the opening melodic idea towards the end of the piece is accompanied by much richer figuration and is marked agitato. As a result, there is a drama in this final section which is entirely lacking at the beginning of the piece.” (Ibid., 48)

The following analysis will examine some of the particular musical characteristics Chopin used to effect this heightened drama. To understand how this later nocturne departed from Chopin’s earlier formal approaches, I will first compare it with a nocturne that was composed ten years earlier, Op. 15 No. 1 in F major. (Download the C minor score here, the F major score here.)

The nocturnes are both cast in the typical ABA form, with a clearly projected homophonic texture in the A section, and a contrasting texture in the B section. In the F major nocturne, the A section features the nocturne texture that Chopin used so well: a vocal-like melody in the right hand with the standard nocturne accompaniment of broken chords in the left (Example 1). The C minor nocturne features the same vocal-like melody but with a slow “oom-pah” accompaniment in the left (Example 2). Both nocturnes also have a B section that adds drama to the piece. It explodes right from the start in the F major nocturne, clearly marking for the listener that new territory has been reached. In the C minor nocturne, the boundaries are more fluid, and the dramatic intensity gathers gradually. 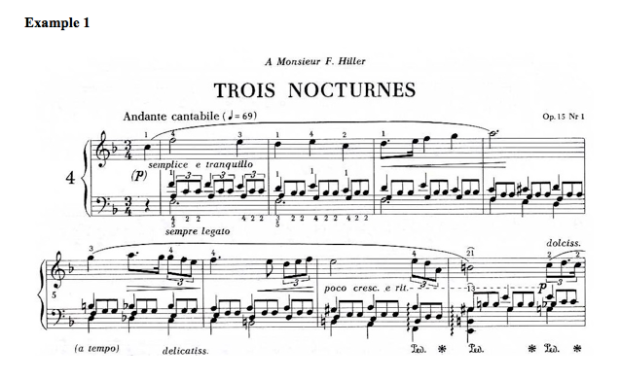 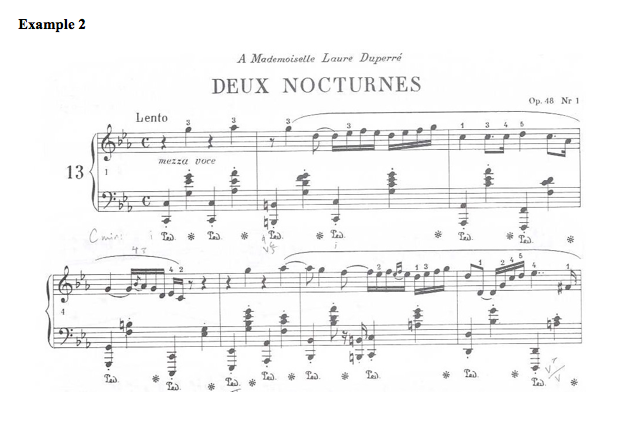 The F minor nocturne had begun delicately and simply in the A section, with semplice e tranquillo, dolcissimo, and delicatissimo markings. Out of this peaceful mood breaks the furious  con fuoco section (m. 25), which holds forth in all its turbulent glory unceasingly for the next 24 measures until it finally peters out and leads, calando, back to the A section material. It is a true return, with the left-hand accompaniment lifted directly from the beginning section. The right-hand melody is also the same, with added ornamentation.

The phrase structure also returns almost whole, the only difference being that what was an open phrase in m. 24—the one which led into the B section—now receives a proper closure in the final four measures of the piece. In other words, the story of this piece is that it begins in one place, moves to another, and then returns right back to the place where it started—your basic there and back again. If this piece were a drama, it might be described in the following way:

In other words, it is no drama at all, but rather more akin to a da capo aria form. An aria provides a momentary tableau within a larger story, and is not expected to contain a complete dramatic span. Neither is this nocturne.

The later nocturne in C minor, on the other hand, follows a more linear progression, creating a drama that begins, develops, and ends somewhere new. Instead of having alternating sections with no formal, stylistic or rhythmic bleed, as in the F major nocturne, the musical forces introduced in the B section (mm. 25-48) affect the restatement of the A section at the end of the piece (mm. 49-77). On a structural level, this is most keenly felt in the development of rhythmic pulse throughout the piece. In the A section, the rhythmic streams break down into groups of two and four, with the two highest levels of subdivision being eighth notes and sixteenth notes (all in duple groupings). The B section maintains this stream throughout the entire first statement of the chorale (mm. 25-36). The restatement of the chorale melody soon meets with a cross-cutting force (m. 39), a rising chromatic figure that obliterates melodic and rhythmic flow by introducing a new rhythmic stream: sixteenth notes grouped as triplets. The chorale tries several times to go on to completion, each time only to be interrupted yet again, until the rambunctious triplet stream eventually takes over completely by m. 46.

All hope of a “there and back again” form is not yet lost. Like the F minor nocturne, this tempestuous contrasting section may still peter out into a restatement of the A section just as it was in the beginning of the piece. But it is not to be. Instead, the new triplet stream introduced in the B section carries over into the restatement of the A section, beginning in m. 49. Like a locomotive, the momentum of the chromatic triplet motive has gathered to such a point that it would take a major opposing force to counteract it. Chopin provided no such force, and following section gives in to the inertia. This results in two opposing streams occurring side by side—one dividing the beat into four sixteenth notes, one dividing it into eighth-note triplets. It is a typical hemiola effect, with the undergirding of an extraordinary formal rationale.

The transformation of the A section material is the result of the developmental nature of the B section. Recall the B section of Op. 15 No. 1. The fiery nature of that section was consistent from beginning to end, bookended by two relatively calm sections. The B section of Op. 48 No. 1, on the other hand, builds gradually, constantly adding both in dynamic level and rhythmic intensity. The difference between these two story-lines can be graphically represented—though roughly—by a series of bars, where an increase in the height of the bar reflects an increase in inertia (increase in inertia in this case results from an increase of various musical elements such as dynamic level, rhythmic interest, and range).

In other words, if the C minor nocturne were a drama, it might be described in the following way:

This story-line fits much better into the mold of a drama than the F major nocturne. As a result, David Rowland’s observation about drama in Op. 48 No. 1, stated above, can be expanded. This piece not only has drama, it seems appropriate to talk about the piece as a drama.

The fusion of these two contrasting rhythmic streams in the A’ section has many ramifications, including grandiose figuration, rhythmic tension, and an increasingly dense texture. Grandiose figuration occurs in both the left and right hands, where the eighth-note triplet has become the basic pulse for the accompaniment. This underlying pulse creates rhythmic tension with the melody, because the latter retains the subdivision into groups of four sixteenth notes from its initial statement. The result is a recurring four against three rhythm (see mm. 54, 55, 58, 59, 66, 68, and 69-70). Also, the texture of this final section, although consistent on a wallpaper level, changes subtly by adding density. In mm. 49-62, the left hand has only two notes in a chord at a time (with a lone exception in m. 51). But in m. 65, at the beginning of a new phrase, a third note is added to the successive chordal inversions in the left hand, making an already dense texture even more so. This continues until m. 71, the start of the final cadence of the piece. From this point on, there is a denouement, gradually reducing the density of the texture to the end of the piece.

What a difference the accumulation of one new element can make. It is representative of a subtle shift in Chopin’s approach to the nocturne, one in which formal sections are not hermetically sealed but have the ability to influence one another. And although this nocturne may have been the first to reflect linear progression on such a scale, it was not the last. The A’ section of the other nocturne in Op. 48 (No. 2 in F# minor) also undergoes a transformation, though not primarily through rhythmic developments. In No. 2 it is the melodic, harmonic, and phrase structure that differs from the first A to the last—the very elements that are retained in the second statement of the opening C minor theme. But by either compositional technique, Op. 48 represents a departure from the prevailing da capo form in Chopin’s nocturne style, towards nocturnes that were through composed.

The whole Ballade is in effect a single magnificently sustained, ten-minute, 264-bar dramatic crescendo that continually gathers momentum from portentous introduction to cabaletta-like coda…. The piece shows him to have been capable of formal planning on a colossal scale few had attempted since Beethoven, however novel or sui generis the relationship of the constituent parts. (III, 369)